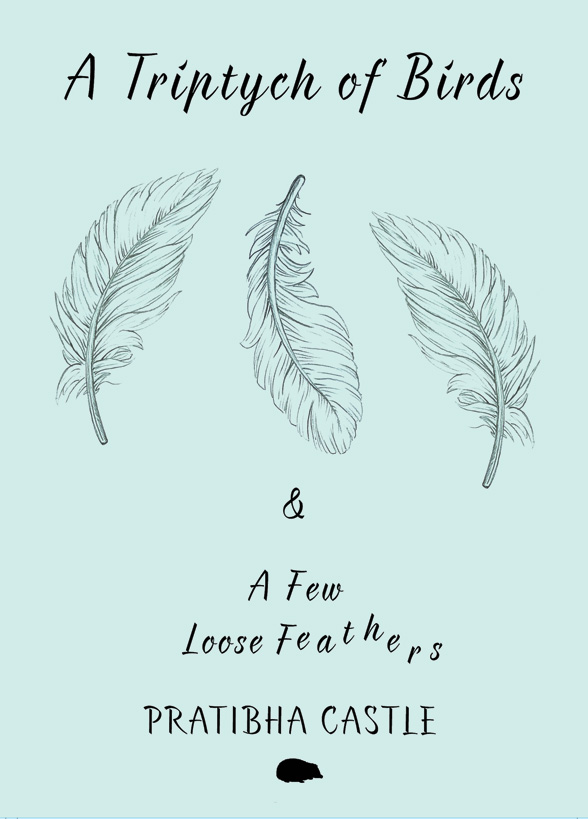 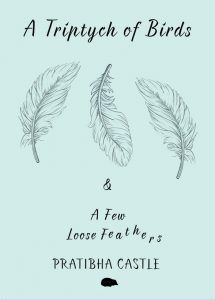 ‘In Pratibha Castle’s sensual, sacramental debut pamphlet, words hum like insects in high summer, tempt the tongue like the last sweet smear of cake batter, and fly like feathers after a lifelong mother-daughter catfight. From lonely childhood Wimpy Bars to lecherous confessionals, Portobello Market in the Swinging Sixties to a garrulous Friday night down the pub in Kells, remote family homes to mourning walks in the South Downs, all the vivid spirit and pain of an Anglo-Irish girlhood coming-of-age is resurrected in these pages and released like petals on the wind. Castle’s poems have a heady perfume and courageous way with a secret reminiscent of Edna O’Brien and Medbh McGuckian – and a subtle incantatory magic all their own.’

‘Pratibha Castle has matched the flow of these poems to the yearning souls they describe. Her light-footed words often slip free in surprising fashion, nimbly breaking the lines and creating unexpected angles onto a fund of timeless material in which souls yearn for release from the grip of bullying belief-systems, and where nature offers its ancient consolations.’

‘How I have enjoyed reading this collection by emerging poet Pratibha Castle as she guides the reader into the liminal spaces that rest between love, loss and the spiritual world… Her use of imagery, language and metaphor both informs and empowers her work. There is a strong elegiac quality to the poems which adds depth and richness, a delightful tapestry of light, shade and gravity. ‘A Triptych of Birds and a Few Loose Feathers is a beautiful work of art.’

‘The poems in this collection are full of nature and memory, love and loss. They speak movingly of the hinterland of self, of how we are shaped by people and places – and how, no matter where we go or who we become, the landscape of the past still lies within us. Pratibha Castle sustains a clear, lyrical voice, but is also not afraid to speak directly to the heart. A great debut collection.’

From you and her smiling at me as I curl in bed, puzzling why you never smile that way at one another (Riddles)

With a language recalling Medbh McGuckian, Castle crosses a South of England Catholic upbringing with a rich, difficult knot of inheritance ‘flashed crazy/like a Kildare mare’ as she signs the death of her mother with a circling of bird-calls. A superb debut.’ 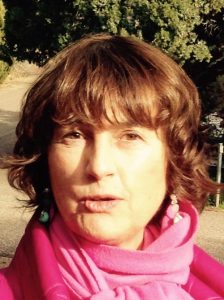 Pratibha Castle, at various times a holistic therapist and workshop facilitator, singer, hippy, was born in Dublin and now lives in West Sussex. Though she received some acclaim as a writer at the age of nine, winning a Cadbury’s essay competition, also writing, directing and acting in a school play aged ten, she only turned to writing as an adult at the age of 60, prompted by her mother’s death.