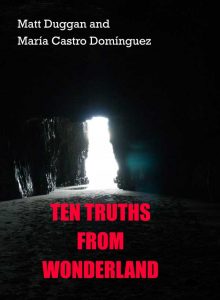 I have to say that this poetry Conversation is one that I particularly love, featuring some fantastic poetry from both Maria and Matt and translations from Ana too.

It was only a matter of time then before it became our Book of the Week and I am sure that you will enjoy it.

In a time of change this pamphlet is essential reading, all the poems are in English with translations into Spanish by Spanish poet Ana Gavila.

Some signed copies are still available…

Born and raised in London, Maria Castro Dominguez is the author of two poetry books. “A face in the crowd” which is her 2016 erbacce-press prize winning collection and “A Cuatro Manos” (Four Hands) co-authored with Jacobo Valcárcel.

Her poems have appeared in numerous journals such as Retort, Expound, Knot Magazine, Blaze Vox, The Argotist, Lakeview International, Harbinger Asylum, Black Mirror Magazine, Message in a Bottle, Carillon, The Tower Journal, Bareknuckle Poet (online and in their first print anthology), Apogee, StepAway, Of/with, London Grip. She has flash fiction published in Out of the Gutter and Friday Flash Fiction.

She lives presently in Gran Canaria where she works as a freelance writer teacher, translator, and proofreader. She holds a Bachelor´s degree in English philology from the UNED.

Her love of poetry has been a constant throughout her life. She aims to transform the familiar into the new through her poetry. Her poetic influences have been Percy Bysshe Shelley, The Imagist poets, Les Murray, Tomas Tranströmer, Pablo Neruda and many more. 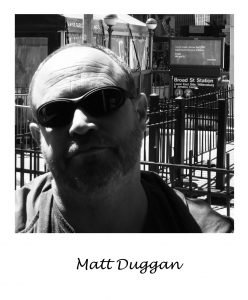 Matt was born in 1971 and lives in Bristol in the U.K. with his partner Kelly and their dog Alfie, his poems have appeared in many journals across the world such as Osiris Poetry Journal, Ink, Sweat, and Tears, The Blue Nib, Into the Void, The Journal, The Dawntreader, Midnight Lane Boutique, Anti—Heroin Chic Journal, The High Window, A Restricted View from Under the Hedge, Ghost City Review, Laldy Literary Journal, L’ Ephemere Review, Carillion, Lakeview International Literary Journal, Levure Litteraire, erbacce journal, The Stray Branch, Prole, Black Light Engine Room, Militant Thistles, Matt won the Erbacce Prize for Poetry in 2015 with his first full collection of poems Dystopia 38.10 and became one of five core members at Erbacce-Press, where Matt interviews poets for the erbacce-journal, organises events and reads with the other members for the annual erbacce prize.

In 2017 Matt won the Into the Void Poetry Prize with his poem Elegy for Magdalene, and read his work across the east – coast of the U.S.A. with readings at the prestigious Cambridge Public Library Poetry Series in Boston, a guest poet appearance at The Parkside Lounge and Sip This in New York, Matt read at his first U.S. book launch in Philadelphia and has two new chapbooks available One Million Tiny Cuts (Clare Song Birds Publishing House) and A Season in Another World (Thirty West Publishing House) plus a small limited edition booklet The Feeding ( Rum Do Press) Venice and London. He has read his work across the world including The Poetry on the Lake Festival in Orta, Italy, the Poetry Café in London, and in Paxos in Greece and at various venues across the U.K.