Well, I have to say that our 39th Book of the Week is something special, different and very much brilliant – coming from the mind of the wonderful Oz Hardwick. 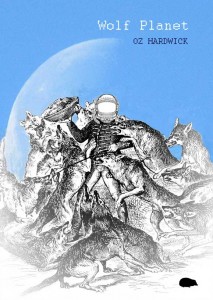 Sleepwalk or spacewalk? Wolf Planet is an elliptical, hallucinatory prose poem that crash-lands on a parallel world as bright and fractured as a broken mirror. Memory, faith, and desire clutter urban ring-roads and abandoned churches, as all the while the Big Bad Wolf – who may not be so big or so bad – presides like the ghost of Piers the Plowman or Trout Fishing in America. A unique vision for strange times.

In this densely poignant novelette where a red-eye express is a route to noir, who’s the Big Bad Wolf? Wolf Planet is a genre bending chapbook of literary fragments evocative with myth, science fiction and the poetic. This staggering offering from a bold artist is a prodigal archetype that refuses to be tamed.

In Wolf Planet, Oz Hardwick has built for us a hazy, smoke-filled fairy tale as much about the past as about the present, a diorama like Borges’s Aleph – if you look just right, crouching there in the cellar under the dining room, you can see the point that contains all other points. Everything here is a metaphor; everything here is literally true. Don’t read it too fast; or, if you do, read it again. Read it again anyway; it won’t disappoint.

Oz Hardwick is a York-based writer, photographer and musician, who has been published extensively worldwide, and has read everywhere from Glastonbury Festival to New York, via countless back rooms of pubs. His prose poetry chapbook ‘Learning to Have Lost’ (Canberra: IPSI, 2018) won the 2019 Rubery International Book Award for poetry. His most recent chapbooks are ‘The Lithium Codex’ (Clevedon: The Hedgehog Poetry Press, 2019), a collection of “powerful, startling, and utterly original” prose poems (Angela Readman), and ‘Wolf Planet’ (Clevedon: The Hedgehog Poetry Press, 2020), a ‘staggering offering from a bold artist’ (Eugen Bacon).

A keen collaborator with other artists, Oz has had work performed by classical musicians in UK concert halls, by flamenco musicians in Italian villas, and with experimental sound and film artists in an Australian cinema. The latest publication from this collaborative ethos is ‘Close as Second Skins’ (Beaworthy: Indigo Dreams Publishing, 2015), a tanka sequence written with Amina Alyal, which draws West and East, past and present into crystalline poems that glitter and shine long after the book has been closed. This was shortlisted for the 2015 Saboteur Collaborative Work Award.

His performance photographs have been used on album covers by bands including Hawkwind, Solstice, Magic Mushroom Band, Ozric Tentacles & Haze, as well as in magazines and books. He has also exhibited in galleries and had his photographs in a number of academic books and journals.

Oz has played in a number of bands – mainly bass, but also other stringed instruments. Recordings with Sixpenny Wayke & A Tiding of Magpies are featured on compilations ‘Hail be You Sovereigns, Lief and Dear’ and ‘The Forme To The Fynisment Foldes Ful Selden’ (Cold Spring, 2013 & 2020). He is also a regular contributor to the music magazine RnR.

By day, Oz is Professor of English and Programme Leader for English and Writing at Leeds Trinity University. In an academic capacity, he has published the monograph, ‘English Medieval Misericords: The Margins of Meaning’ (Boydell, 2011), edited a number of books on the Middle Ages and myth, and written many articles on the Middle Ages and medievalism, along with Creative Writing as an academic discipline.

His one regret in life is that he is not Belgian.