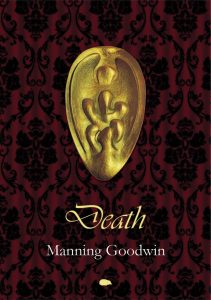 I realise that it sounds many kinds of odd to congratulate Manning on his ‘Death’, but you have to celebrate the launch of every collection of beautiful poetry that comes along life’s highway toward you – and this is very much that.

So if you would like to find out more and treat yourself to a copy, you can read all about it Here

“In his refreshing, clean lines Goodwin combines humour and close observation with hope for a future that inevitably involves departure from this life on earth.”

– Sevak Edward Gulbekian, author of In the Belly of the Beast

“Manning Goodwin’s poems are insightful meditations about the dilemmas of modern daily life with a deeply felt spiritual foundation. They address philosophically, with honesty and wit, the dichotomy of inner turbulence and a contented quotidian surface.”

– Nomi Rowe, author of In Celebration of Cecil Collins: Visionary Artist and Educator

“Goodwin’s collection reads like a memoir on mortality, taking us inside a liminal space where vignettes of everyday life – reading, having the boiler fixed – jostle with Cicero and salmon, poisoned figs, goldmines, Afghan ponies and Chinese seas.

From the opening line, ‘Memories of missing people’, Manning’s writing feels as urgent as it is oneiric; death, like the ‘chaps in caps’, is never far from the poet’s thoughts as he gently oscillates between acceptance, humour and thoughts of the beyond, imbued at times with a poignant fatalism (‘They took away my flame yet let me live’).

In one poem, he writes of making a mistake when planning his tombstone (‘a five instead of twenty-five thus lopping off a score of years’), while his study of the belladonna plant weaves ancient tales into the plight of modern hearts. The poems flow around gentle structures; strong iambic rhythms are particularly effective in ‘Sockeye Salmon’ (‘We jump the falls that thunder down /We feed both bear and man, surviving’). A dialogue with death, in which every word feels warmly and purposefully alive.” 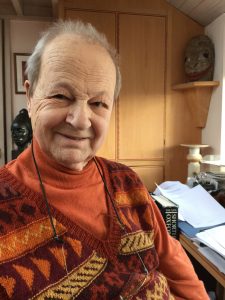 Manning Goodwin currently resides in beautiful Sussex, England. Born 1931 in New York City, he was educated at Yale University, and later at the University of Virginia Law School. As a young man he worked in Washington DC as a lawyer with the US Senate and then at the State Department in the Legal Advisors’ Office. His love of knowledge led him to teaching and later his love of nature led him to farming. Later he became a sculptor. Manning has always written poetry, aged 89, he’s still writing and has self-published four volumes of poetry.

Find out more about Manning at: www.manninggoodwin.com