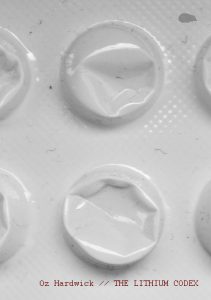 I am so pleased to be able to share with you, our fifth Book of the Week of 2021, a quite (and quietly) brilliant wee collection from the awesome Oz Hardwick.

‘The Lithium Codex’ was the first collection that we published from Oz and it is stunningly good.

You can buy a Signed copy from Oz Hardwick HERE

Everything sings in these pages, from birds to buildings who remember the children who once lived there. The work is a soundtrack of ghosts, a world of recovery where the dead sit on deckchairs and the living compare themselves to chalk outlines on the pavement. Powerful, startling, and utterly original these prose poems have a pulse. Hardwick is a master of the form. Angela Readman

Poems in The Lithium Codex shape pages of a book of melancholy; gently fabricated soft prose blocks of longings and losings; lyric attempts – doomed to fail but, as failure, always also positively self-contained – to home in on and perhaps also to shrink from, or simply to understand, the painful distance or chasm agape between self and world, I and other, psyche and language, through beautiful, thoughtful, fragile phenomenological laments. Memoryscapes, mindscapes, drifting, to-ing and fro-ing in private and public time, without a real desire for origo or destination, or even authorship and/or companionship, always torn by tension of phobia and philia, processing the process of being, remembering, writing itself. Ágnes Lehóczky

While each poem of The Lithium Codex gives the impression of being improvised, what impresses is how skilfully the effects are realised. It is not just the inventiveness of the writing but its precision. These prose poems have the authority of a classic.  David Mark Williams

Oz Hardwick is a York-based writer, photographer and musician, who has been published extensively worldwide, and has read everywhere from Glastonbury Festival to New York, via countless back rooms of pubs. His prose poetry chapbook ‘Learning to Have Lost’ (Canberra: IPSI, 2018) won the 2019 Rubery International Book Award for poetry. His most recent chapbooks are ‘The Lithium Codex’ (Clevedon: The Hedgehog Poetry Press, 2019), a collection of “powerful, startling, and utterly original” prose poems (Angela Readman), and ‘Wolf Planet’ (Clevedon: The Hedgehog Poetry Press, 2020), a ‘staggering offering from a bold artist’ (Eugen Bacon).

A keen collaborator with other artists, Oz has had work performed by classical musicians in UK concert halls, by flamenco musicians in Italian villas, and with experimental sound and film artists in an Australian cinema. The latest publication from this collaborative ethos is ‘Close as Second Skins’ (Beaworthy: Indigo Dreams Publishing, 2015), a tanka sequence written with Amina Alyal, which draws West and East, past and present into crystalline poems that glitter and shine long after the book has been closed. This was shortlisted for the 2015 Saboteur Collaborative Work Award.

His performance photographs have been used on album covers by bands including Hawkwind, Solstice, Magic Mushroom Band, Ozric Tentacles & Haze, as well as in magazines and books. He has also exhibited in galleries and had his photographs in a number of academic books and journals.

Oz has played in a number of bands – mainly bass, but also other stringed instruments. Recordings with Sixpenny Wayke & A Tiding of Magpies are featured on compilations ‘Hail be You Sovereigns, Lief and Dear’ and ‘The Forme To The Fynisment Foldes Ful Selden’ (Cold Spring, 2013 & 2020). He is also a regular contributor to the music magazine RnR.

By day, Oz is Professor of English and Programme Leader for English and Writing at Leeds Trinity University. In an academic capacity, he has published the monograph, ‘English Medieval Misericords: The Margins of Meaning’ (Boydell, 2011), edited a number of books on the Middle Ages and myth, and written many articles on the Middle Ages and medievalism, along with Creative Writing as an academic discipline.

His one regret in life is that he is not Belgian. 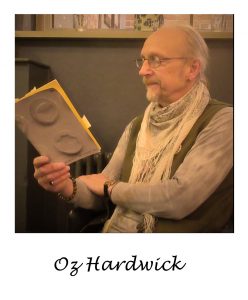 I asked Oz a few impertinent questions about his collection, Here’:

1. What was the inspiration for the collection and how long did it take to come together?

I’ll start by saying I’m a bit wary of the term ‘inspiration.’ I’ve a suspicion that I might have been inspired on one occasion – early/mid 80s, maybe? – but I’ve never written a poem about it. The Lithium Codex evolved, as the title suggests, out of a period in 2015-16 during which I was prescribed lithium. It’s not a subtle medication, and it really impacts upon every aspect of one’s engagement with the world. One’s perceptions and responses go through a filter, as it were. During this period, I wrote a fair bit of what became my Learning to Have Lost chapbook (IPSI/Recent Work, 2018), but the sensory experiences have made a lasting impact, and The Lithium Codex grew out of my writing over about two and a half years. As the other half of the title suggests, it’s a compilation rather than a strictly unified whole, though it does have its own rhythm and implied narrative.

I grew up in a small house with three generations of us living together: my sister and I, my parents, and my mum’s parents. My granddad had left school at 14 to work on farms but, though he’d not had much of a formal education, he loved the Lake poets and Robert Burns, and could recite tens – quite possibly hundreds! – of poems. He’d give talks to Burns societies and so on. He was a huge influence on me growing up, not least in poetry and music, and I always had a ‘feel’ for poetry, though not necessarily an academic sort of interest until much later. It was just something that was about when I was a child, and just as my granddad wrote poetry, so did I. I really started writing a lot when I was 12, and just haven’t stopped yet. Later on, my parents – particularly my mum, who was very bright indeed but hadn’t had much in the way of educational opportunities either – were really enthusiastic and supportive … even when they didn’t understand a word of it.

Both. I have a tendency to become really obsessive on subjects that interest me, and poetry comes out of that, as do ideas that find their form in academic writing. So, I don’t research for poetry, but it is part of my obsessive processes.

I don’t want to say anything about the poems, as I like readers to make what they will of them. By way of a confession, though, I’ll admit that although I’m normally a stickler for absolute truth, the blister pack on the cover isn’t lithium. Other antipsychotics are available.

There’s a reader on Amazon who wrote that the poems “fully make me feel that crazy feeling of reaching into the depths of memory, touching those things over and over until they change, or become fizzy” – and that’s pretty much exactly what I wanted. I have to confess, though, that I’m absolutely delighted when anyone comments on it at all, as finding anyone who wants to read it is way more difficult than the writing.